A FEW years back on this site, there was a fairly spirited discussion between myself and the late and much-missed @HTPBDET over the relative merits of the Third Doctor and as this week was the centenary of the birth of Jon Pertwee and there’s been a number of celebrations of that fact around the t’internet, I thought now might be a good time to revisit that particular debate.

At the time, I must admit that I was rather down on Three, castigating for his sexism, patriarchal condescension and neck-rubbing snootiness, arguing that he was easily the most Establishment Doctor. I’m not sure you could say that these accusations are now wholly untrue but it’s certainly true that on a sustained rewatch of Pertwee’s era that I’ve greatly modified my opinion of Three and that he’s a more subversive figure than I once gave him credit for. And while it’s hard to get around the patronising sexism angle of his character, as SM uncomfortably pointed out in Twice Upon A Time, it was not something remotely confined to the Third Doctor, although it seems his is the era in which it is most remembered. 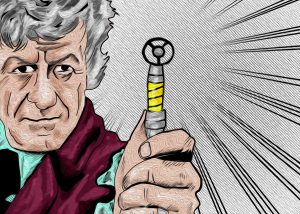 There’s certainly an interesting parallel to be made in watching Pertwee’s first season on the back of Series 11. Both are dramatically different from their predecessors in a number of ways. The most obvious of those is technologically, with Pertwee being the first Doctor to be broadcast in colour, mirroring perhaps the greater visual richness of Jodie Whittaker’s first series. But there are also other similarities. Neither series has any returning monsters, for example, and they both see a significantly expanded central cast. I would not be massively surprised to learn that Chris Chibnall had Season 7 in mind as some kind of template as his first series as showrunner.

Something else that they might have in common is that these experiments were not wholly successful. Pertwee’s first season starts strongly with what surely must be one of the strongest regeneration stories of the series (for my money, beaten only by The Eleventh Hour) and the whole season is characterised by strong, ideas-driven SF, even if Nigel Kneale might have objected to the actual provenance of some of those ideas. Pertwee nails his Doctor from the off and is a strong and likeable presence in all his stories (although he’s notably more Troughtonesque in his first story than he would later become). The season’s key weakness, however, is in the sheer amount of padding. With the exception of the sensibly paced Spearhead, every story had a good two episodes of needless padding to them — so much that you could have comfortably shaved all those stories down and got an extra story out of it.

But there’s no doubt that the Quatermass-esque quality of Season 7 was considered something of a failed experiment as the following series represented something of a course correction and is all the better for it. Gone are the over-long stories, as is the heavy science vibe. In it’s place is the more Bondian Doctor we usually associate with Pertwee, as well as stories that had a slightly more rollicking, almost pulpy vibe to them. The comparison can be starkly seen in the season openers, which are essentially sequels. The creeping paranoia and relative realism of Spearhead is to an extent replaced with explosions, car chases and a Hammer-esque Grand Guignol horror of faceless policemen, killer dolls and lethal daffodils. And this would be followed by prison-break dramas and Satanism pastiche, largely setting the tone for the rest of Three’s era, not least because it introduced the Master in the form of Roger Delgado, giving a wonderful performance that not only added something vital and long-lasting to Who lore but also gave something for Pertwee’s Doctor to memorably define himself against

Not that this is a throwaway era of the show in any way. If any of the numbskulls who currently bemoan Who ‘getting too political’ had watched the Pertwee era, they would never stop having palpitations. Because despite the high action, this was an era that tackled industrial relations, terrorism, environmental disaster, corporate responsibility and political activism. Could you imagine what the current Brexit brigade would have made of a story a like The Curse of Peladon if it had been made now?

There is an interesting curve to Pertwee’s time on the show, however. It started with a dramatically different tone and his last season seems oddly muted too compared to the exuberance of the previous seasons. Part of this was undoubtedly due to the untimely death of Delgado but the UNIT family also seems to be relegated to the background and even Pertwee’s performance seems to change too, becoming more muted somehow. Like Season 18, the entire season seems to be one of a Doctor winding down, preparing for his exit.

I’m happy to say that over the past couple of years that Pertwee’s Doctor has rocketed up my personal rankings and I belatedly concede the argument to @HTPBDET. Although this is an interesting part of being a Who fan, isn’t it? It’s not really one show but several folded in on each other like Russian Dolls. Over time your allegiances can change, eras fall in and out of favour and your relationship with different aspects of the show mutate and evolve. That is perhaps part of the programme’s enduring magic.

But the final word should go to Sean Pertwee (totally worth watching in the excellent Gotham and surely a Doctor in waiting) in this really rather touching tribute to his father and someone whose contribution to the show should never really be underestimated.