On Sunday 10 May it’s a double watch along of “The Zygon Invasion / Inversion”. Follow the Twitter hashtag #TruthOrConsequences on Twitter at 7:15pm, cos Boris has got something he wants to say at 7pm. Writer Peter Harness and Ingrid Oliver (Osgood) are due to join in (not with Boris). 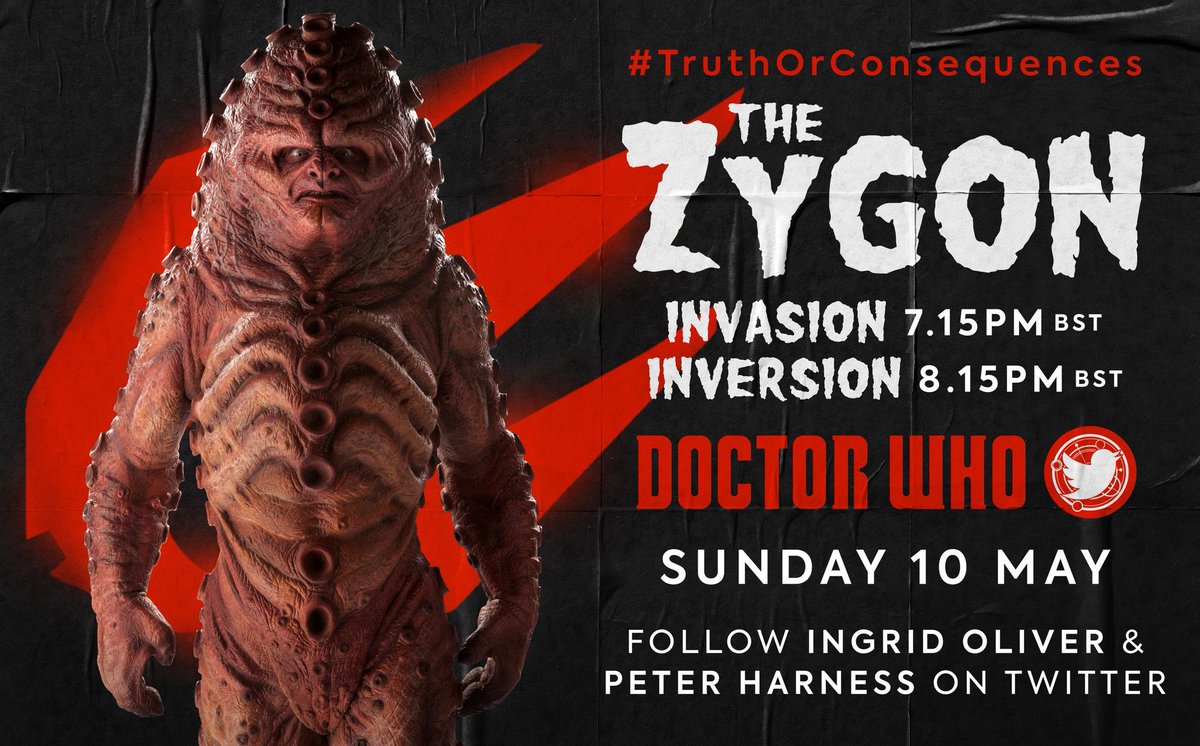 You can also join in the conversations here afterwards:

Part two. With Zygons everywhere and UNIT neutralised only the Doctor stands in their way. Can he stop a war and save his friends? #TruthOrConsequences

The Zygons have been living amongst us without our knowledge. Can the Doctor, Clara and UNIT stop a possible uprising? #TruthOrConsequences

The Doctor encounters one of his greatest enemies, thought extinct. #TheMetaltron

It is 1913. A schoolteacher called John Smith dreams of adventures in time and space #DoctorOfMine

The Earth has moved and the Doctor tries to find it. On Earth a bunch of ex-companions and allies form a resistance. #SubwaveNetwork

Trapped in a world unlike any other he has seen, the Doctor faces one of the greatest challenges of his many lives. #HellofaBird

When he follows a Time Lord distress signal, the Doctor finally gets to meet the TARDIS in person. #BiggerOnTheInside

A new face, new tastebuds, no TARDIS, a faulty sonic and only twenty minutes to save the planet. #FishCustard

In 2005, Saturday nights were about to become interesting for Rose Tyler, and a new audience for Doctor Who. #TripofaLifetime

After 50 years of adventures in Time and Space, it’s time for the Doctor to confront his own dark past in the 50th anniversary special. #SaveTheDay

It’s back! A new series for the new year. From what I’ve heard some lessons have been learned from the last series (which wasn’t too bad but did have a few missteps). Here’s hoping we are in for a lot of treats this season.

The finalé. The Master has appeared, the Cybermen are on the march and, for The Doctor, nothing will ever be the same again.

Ascension Of The Cybermen

The aftermath of the Great CyberWar. The Doctor is intent on protecting the last of the human race, but has she put her companions at risk?

The Haunting of Villa Diodati

The Doctor plans to spend the evening with literary greats telling ghost stories, but the ghosts are all too real.

Can You Hear Me?

The Doctor and friends are stalked through time and space when they head back to Sheffield for a quick visit.

What connects a missing astronaut, birds behaving strangely and a US naval officer who washes up on a beach?

Fugitive of the Judoon

The Judoon are targeting Gloucester, England. But who are they looking for? And what did they do to incur the wrath of the Judoon?

It’s 1903 and something is wrong at Tesla’s generator plant on the edge of Niagara Falls. Who or what is sabotaging his work?

The Doctor and friends take a break at a luxury resort but they soon discover that the resort is hiding a number of deadly secrets.

A terrifying plan to destroy humanity is about to reach fruition. Can The Doctor and friends escape multiple traps and defeat a deadly alliance?

Intelligence agents around the world are under attack. MI6 turns to the only people who can help – the Doctor and friends.

In honour of Jodie Whittaker taking over the role as the Thirteenth Doctor we started to re-watch some Doctor Who stories involving female Time Lords or, at least, female Gallifreyans. We started with Susan in “The Aztecs” and we were on Rodan in “The Invasion of Time” until I took a break. But let’s get back to it.

The Invasion of Time (5)

The invaders are gone but the Doctor has a whole new bunch of invaders to deal with – the Sontarans.

The Invasion of Time (4)

The Doctor reveals the Matrix has been invaded and he has a drastic plan to force the invaders to materialise.

The Invasion of Time (3)

The Doctor welcomes the “new masters” of Gallifrey while Leela and Rodan go on the run outside the Citadel.

The Invasion of Time (2)

The Invasion of Time (1)

After signing a treaty with enemies the Doctor returns to Gallifrey and demands the Presidency of the High Council of Time Lords.

Ian finds the way back into the tomb. Can the TARDIS team escape before Tlotoxl’s plans bring them all down?

Tlotoxl finds out about The Doctor’s plans to find an entrance to the tomb and his suspicions are aroused.

Tlotoxl has threatened to destroy Barbara for being a false god and begins to put his plans in place.

The TARDIS has landed in an Aztec tomb and Barbara is mistaken by the High Priest for the reincarnation of the god Yetaxa.

We also started watching Chris Chibnall’s earlier episodes, and here they are – all his episodes before he became showrunner:

The Power of Three

The Doctor and the Ponds puzzle over an unlikely invasion of Earth, as millions of black cubes arrive overnight.

Dinosaurs on a Spaceship

A spaceship hurtles towards certain destruction, unless the Doctor can save it, and its cargo… of dinosaurs!

The Doctor has found the underground Silurian city where Amy is being held. Rory keeps a watch on Alaya.

The Doctor, Amy and Rory arrive in Wales where a drilling operation is disrupting the Silurians, who live underground.

Told in real time, the Doctor and Martha receive a distress signal from a spacecraft hurtling towards a star.

Somewhere to hang out and have general chat about Doctor Who. If you’re a new member please pop in and say hello. We’re very friendly.

The latest pub on our pub crawl. A break from the sofa and Doctor Who. Somewhere for chat about news, politics, sport etc. Avoid if it’s not for you.

The Faces of the Doctor

There are now fourteen faces of the Doctor to examine, and also to consider how our favourite show has changed over the years.

A place to post links to, and discuss any news items you come across related to Doctor Who. But NO spoilers!

The ONLY place on this site to post spoilers! Everywhere else is banned. If you post here, make sure you respect other users.

For anything the BBC has released in advance. It may be official, but it could still be considered a spoiler by some.

A thread to discuss your first introductions to the show, your earliest or most vivid memories, and why it means so much to you.

Companions past and present

Here you can discuss your most, and least, favourite Doctor Who companions. Any Adric fans out there?

A general thread to discuss fan creativity such as fan fiction, videos, art, costumes and conventions.

Our retrospective of episodes written by Steven Moffat. Please feel free to add to the discussions.

Our retrospective of episodes written by Chris Chibnall. Please feel free to add to the discussions.

We’re also discussing Doctor Who stories from before the gap, as they were originally shown, one episode a week.

A thread to discuss TV shows other than Doctor Who. Which ones are your favourites?

Tell us what you enjoy in the world of film. Dark Knight or Avengers? Looper or The Matrix?

A general thread to talk about your choice of reading material. What are your favourite books currently or of all time?

A general thread to talk about music. How down are you? Are you spinning or downloading?

A general thread to talk about live theatre. Let us know what you’re watching or working on.

A thread for comments and suggestions regarding this site. Site updates will also be posted here.